clock ticking
as they race by-
monkey mind

the stick of Buddhism
teaches a hard lesson-
mental myopia

Today at the Buddhist Temple of Chicago Rev Nakai gave a talk and during this talk she said a phrase. The phrase was “stick of Buddhism” and it hit me, well like a stick.
It reminded of a discussion with my wife about how the path of a Buddhist is not an easy one and it is easy to just settle into complacency and not delve into your own psyche and short comings. I remember reading stories where the Zen Master would hit students with a stick, not to punish them but to jolt them into a new awareness.
So the next time you are stuck try and find a way to jolt yourself out of your mental myopia.

As I approach my surgery date I plan on living each day as mindful as I can up until the anesthesia alters my awareness.
During past surgeries I have memories of talking during the surgery, hearing conversations and even smelling things in the OR. I hope that this time, since I have been meditating more perhaps I can be more lucid and experience new things while my body is repaired. Stay tuned to see what happens.

Shinran founded the Jo^doshinshu^ (True Teaching Pure Land) Buddhist
sect to which Issa belonged. This haiku has the prescript, “Zenko^ji”
(Zenko Temple), the major Pure Land temple in Issa’s home province. At
that temple, Shinran left a gift of a pine tree in a great pot,
centuries ago. Shinji Ogawa notes that Issa is punning in this haiku.
Shinran matsu (“Shinran’s pine”) is close to shiran matsu
(“not-knowing pine”), which contrasts with shitta kao: the “knowing
face” of the butterfly. Thus, Shinji writes, the haiku might be
translated: “butterfly departs/ Shinran’s pine/ acknowledges.” Or:
“butterfly departs/ even the not-knowing pine/ [has a] knowing face.”

More about the pine and Saint Shinran
http://darumapilgrim.blogspot.jp/2011/04/shinran-shonin.html

This Sunday, April 15th 2012, I have been asked to give the message at the Buddhist Temple of Chicago. I decided to discuss the “Four Dharma Seals.” In my research I came across many Buddhist Proverbs at http://japanlifeandreligion.com, the following ten are the my favorites. I am not going to add commentary at this time but I hope to do so in the future. Furthermore, If you live in Chicago please come on by as I would love to meet you.

I also suggest using these proverbs as an object for contemplation/meditation.

Today’s senryu is in honor of Buddha’s birthday.

Today was a special day at the Buddhist Temple of Chicago. Today we celebrated the birth of the Buddha. Most Buddhist congregations celebrate the Buddha’s birthday sometime in April or May. The happy occasion is called Wesak, in the Japanese tradition it is called “Hanamatsuri” which translates to “The Flower Festival”.

The name Hanamatsuri derives from the story of Buddha’s birth. The story says that when the Buddha was born, the Earth was so glad that flowers sprang forth in full bloom. This show of joy of Earth manifested itself because there had not been a real Buddha on Earth for centuries. The deities, too, were also so happy that they sent a shower of green tea accompanied by music. It is all very festive. (The Deities come from Japanese Mythology and are part of the Japanese culture not Buddhist)

This festive event, actually a birthday party, is for, Gotama Siddhartha Shakyamuni, a real human being who was like us was not always a Buddha. He, just like us, shared in Samsara (the cycle of all life, that is birth, growth, illness and challenges, aging, death and rebirth). Humans share this cycle with all forms of life, and non-living things like mountains and stones—and the waters of the earth. In fact our whole planet and Universe goes through the same cycle of impermanence.

In the teachings of Shinran, by living our lives in the spirit of a Bodhisattva we help recycle (teach) the truth of Amida’s Bodhisattva Vow. By living such a life we bring the Dhamma (Dharma) back into the world of suffering humanity. This program can start at any point on the cycle of, in fact it embraces the whole process as it is.

So when you sing “Happy Birthday to the Buddha” in your Hanamatsuri service, sing your heart out and enjoy the day, it could be the starting point of something very important.

The images below are of the Dharma School children performing Kambutsu. This represents the washing of the newborn baby Buddha. 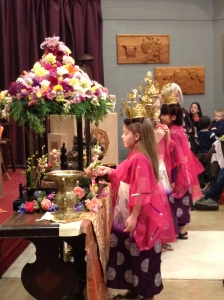